Beware of the many vegetarian statistics articles floating around the Web, as the bulk of them are inaccurate. It seems as though every Dick, Tom, and Harry writes on this subject without any facts to substantiate their claims.

Make sure you use stats from reliable sources only. Vegetarian trends 2020 is a very important topic that should be handled with integrity and honesty. Millions of people are vegetarian, and we should do them right by only sticking to the facts, right?

That’s exactly what we’ll do in this article. We’ll share some intriguing FACTS on the vegetarian way of life. We promise to keep it short and sweet. Put on your helmet because you’re in for a ride!

These stats were only an appetizer. Are you ready for the entree?

We all know that living a healthy lifestyle is beneficial for our mind and body. The health benefits statistics that flood the internet show that following a vegetarian diet comes with many upsides.

For an insight as to what these benefits are, check out some of the latest vegetarian trends 2020 has revealed so far.

1. Vegetarian health benefits statistics prove that a plant-based diet reduces the risk of death from heart disease by 40%.

Even though a meat-eating diet doesn’t affect the mortality rate significantly, eating quality plant-based food lowers the risk of death from hypertension by 34%.

Vegetarian life expectancy statistics reveal the mortality rate of vegetarians is 12% lower than that of their meat-eating counterparts.

That’s something to chew on.

2. Vegetarian weight loss statistics prove you can lose 2.02 pounds more on a vegetarian diet than on any other diet

Additionally, if you stick to a plant-based diet, you consume only 1,707 calories per day, as opposed to 2,000 calories on most meat-eating diets. Meat lovers have the highest rate of obesity, which is 33.3% higher than vegetarians and vegans.

3. What are the benefits of a vegetarian diet? How about losing 11 pounds and keeping the weight off?

Around six to eight million vegetarians in America believe the meat-free diet benefits of eating more vitamin C and E reduce your chances of getting cancer. Other benefits include a 6.9mmHG lower systolic blood pressure as well as a BMI score of under 30.

When you look at the stats, you’ll realize more and more people are opting for this kind of lifestyle.

Are you already on board, or are you unsure whether you’ll be able to sustain this diet?

If you do decide to go vegetarian, be aware of these pros and cons.

Even the lacto-ovo vegetarian group has a 16.7 % obesity rate, which is worrying. It just goes to show that following a vegetarian diet doesn’t automatically mean you’re immune from obesity.

Lacto- vegetarian statistics reveal that following a lacto-diet reduces your risk of contracting diabetes by 67.95%.

These vegetarian vs meat-eater statistics have everyone talking. Reducing the intake of red meat lowers death for 7 out of 1,000 people. It’s also been found that 8 fewer deaths per 1000 people occur when you cut processed meat out of your diet.

Furthermore, the vegetarian vs. vegan stats also prove more of the same. The increase in vegan products has jumped by 185%, and vacancies for vegan jobs have risen by an astonishing 123%. Danone invested $60 million in dairy-free products to support vegetarian diets.

A vegetarian-inclined diet has immense health benefits. And with more than a quarter of dinner meals in the UK being vegetarian or vegan, these benefits are quickly becoming known. 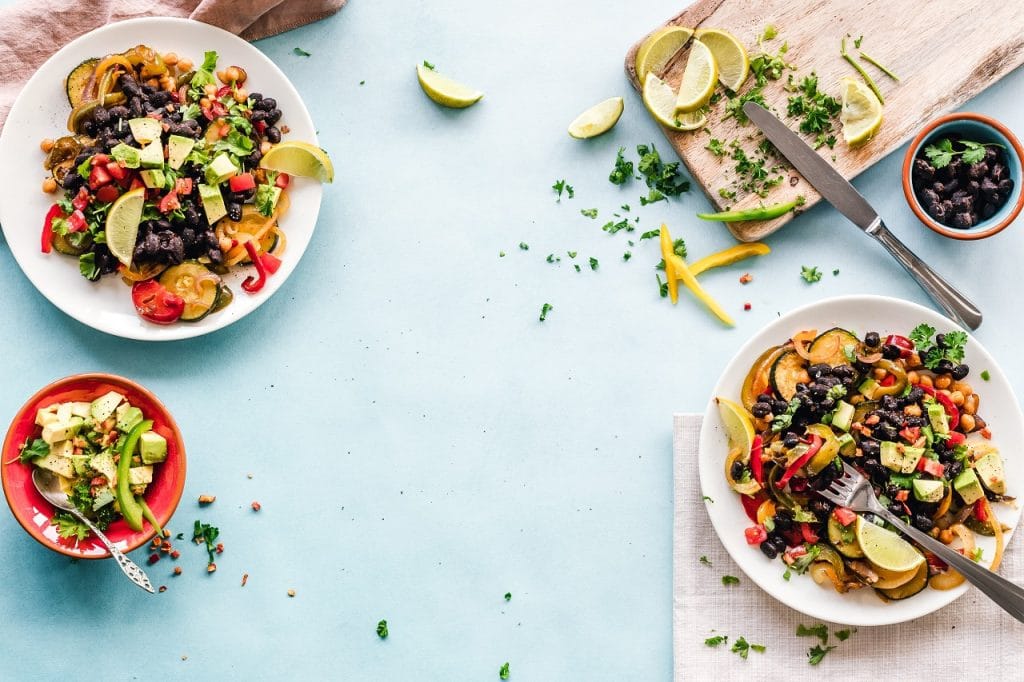 6. There’s been a 65% increase in products that bear the Vegan Trademark worldwide.

(Source: Wikipedia and The Vegan Society)

Vegetarians worldwide statistics reveal that 9,590 products were successfully registered in 2018 with the Vegan Trademark, compared to 6,318 products in 2017.

But what percentage of the world is vegetarian?

It’s estimated that around 8% of the world population identify themselves as vegetarian.

Can you guess what is the most vegetarian country?

If you guessed India, you’d be right because a full 31% of India’s population is vegetarian! Religion and cultural traditions have made Indians the original vegetarians and India the mecca of all things vegetarian.

7. Vegetarian statistics US reveal agriculture consumes 80-90% of all water in the US.

(Source: Statista and The Vegan Society)

Vegetarian population growth is steady, with 10.61% of  Americans identifying themselves as vegetarians. This is huge for a meat-eating nation such as the US.

8. Vegetarian diet statistics prove that vegetarianism lowers the risk of prostate cancer by 35%.

This begs the question:

“Is being a vegetarian healthier than eating meat?”

Well… 8.1 million premature deaths can be prevented annually by following a vegetarian diet.

As with everything in life, there are pros and cons. But vegetarian heart disease statistics prove that following a plant-based diet reduces the risk of dying from heart disease by 32%.

Vegetarian Demographics in the US

So we know that 8% of the world is vegetarian. But WHO exactly are all these vegetarians? Are they young or old? Black or white?

Read on to find out!

9. Two out of three Americans are reducing their consumption of meat.

The US makes up 2.2% of the total vegetarian population statistics, with 33% male and 67% female. There’s still a long way to go to turn America vegetarian, right? In terms of race, 54% are White and 7% are Black, with 25% identifying themselves as other.

Because the vegetarian gender statistics show that females make up two-thirds of vegetarians in the US, we might see more families turning vegetarian soon, right?

10. DC is the most vegetarian-friendly state according to vegetarian statistics by state.

We checked how many vegetarian restaurants each state has to see which state is the most vegetarian-friendly. The District of Columbia came out top with 15 restaurants per one million people. Power to you, DC! Oregon, Maine, and New York followed closely, with ample vegetarian spots but a larger population to serve.

Did you know that Italy has the most vegetarians in the European Union and serves some of the best vegetarian dishes? You heard it here first!

(Source: One Green Planet and Forbes)

It’s good to know that Millennials, who have more than $1 trillion in buying power, are leaning towards a more sustainable food network that supports vegetarianism

12. According to vegetarianism statistics, 59% of vegetarians worldwide are female.

We’ve always suspected it, and now vegetarian statistics from around the world confirm that 59% of vegetarians are female. Are females simply more conscientious about food ethics, or does a good steak have zero appeal to them?

It certainly seems that way:

In the US, men eat 57% more meat than women. Yup, you read that right. They simply can’t resist a good steak.

“Eating with a conscience” is another term vegetarian environmental statistics experts use. This move to create more sustainable food systems has taken the world by storm.

So, let’s look at some valuable statistics that might sway you to join the movement and do your part in saving the planet.

13. Vegetarian facts show that following a vegetarian diet for 12 months has the same effect as taking your car off the road for 6 months.

The vegetarian diet and global warming are closely tied, as the supply chain process from the farm to your plate amounts to 30% of all global greenhouse gas emissions.

And that’s not all:

When you consider the effect of meat consumption on climate change and how much land is used to raise cattle for human consumption, it gets scary. Growing vegetarian food would require two and a half times less land than raising cattle. 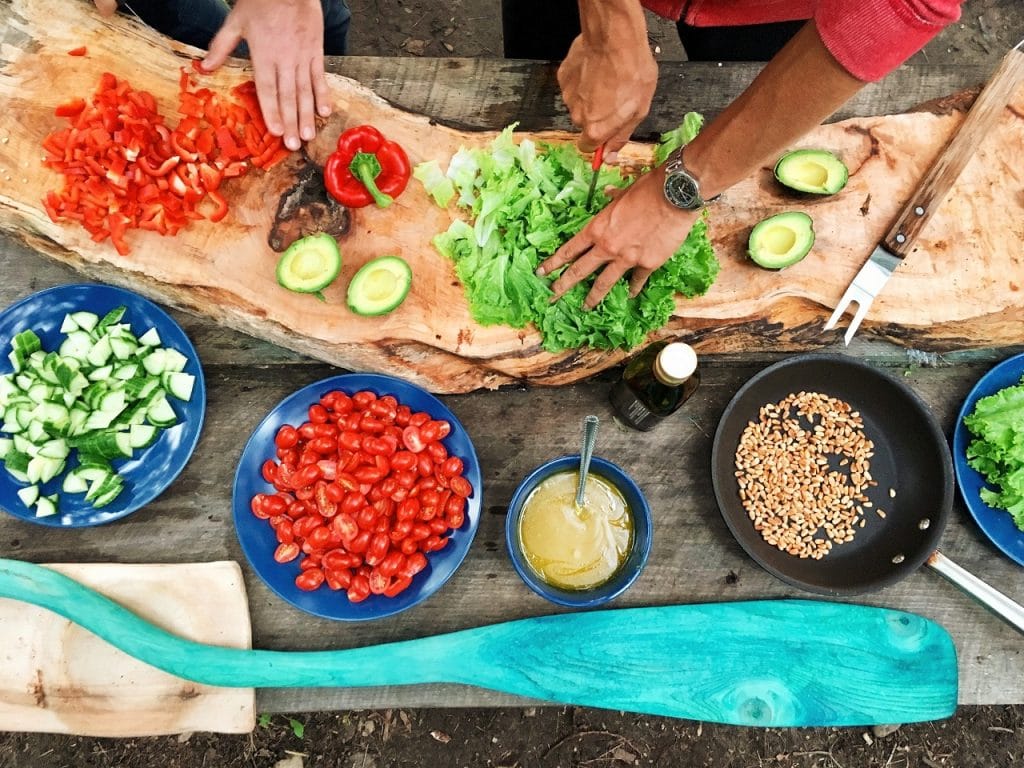 Why Do People Turn Vegetarian?

That’s a very good question! One that we have the answer to. Read on to discover the reasons why people turn vegetarian.

(Source: Down To Earth)

The fourth and fifth reasons why people opt for a vegetarian-diet are reducing global warming and avoiding food toxins.

Does being vegetarian help animals?

We should think so. One of the main reasons people turn vegetarian is because of animal cruelty. Also, 40% of the world’s grain crop is used to feed animals only to slaughter them later for humans to eat.

How does making food to feed food make any sense? We can end world hunger if we use those very crops to feed humans instead.

15. 5% of people who become vegetarians do so for ethical reasons.

(Source: US National Library of Medicine)

Moral vegetarianism argues it’s wrong to cause animals pain during industrial farming simply to quench our appetite for meat when there are suitable alternatives available. It’s ethically wrong, they say – and by “they” we mean 5% of all vegetarians.

Have you ever thought about the moral dilemma of eating animals simply because you want to? And how many vegetarians go back to eating meat?

(Source: US National Library of Medicine)

Faith comes into play for younger people, too, with 2.72% of people younger than 20 stating that their reason for vegetarianism is faith-based.

That was a mouthful. Are you ready for more?

What does the vegetarian industry look like, and is it worth investing in? Is vegetarianism on the rise, or is it simply a hype?

Let’s find out the answers together.

The rise in the number of lacto-ovo vegetarians shows that even big boys like Cal-Maine Foods Inc., whose eggs account for one-quarter of US egg consumption, can’t escape from the impact of vegetarianism.

It’s estimated the vegan food market will increase to $24.3 billion by 2026 and will grow at a rate of 9.1% over the forecast timeframe.

With 8,100 vegan restaurants across the globe, it’s an undeniable fact that both vegan statistics and vegetarian restaurant stats are rising.

18. $3.7 billion will be invested in the plant-based market according to vegetarian statistics 2019.

The vegetarian growth statistics are going crazy, with 25% of Millennials going vegetarian. No wonder the investments into the plant-based market are in the billions.

And don’t think it’s just “green” companies that are making these investments. America’s largest meat producer, Tyson, has a 5% stake in plant-based meat company Beyond Meat, which it bought for an undisclosed amount of money. We bet Tyson spent plenty of green to get in on the green!

The writing is on the wall, and it’s saying do your bit for world sustainability, right?

The vegetarian economy promotes a more economical diet, such as mainly plant-based vegan and vegetarian diets. If we don’t consider discarding meat diets, the world economy can lose up to $1.6 trillion by 2050.

America can save up to $180 billion in medical costs if more people start following a vegetarian plant-based diet.

The vegetarian economy in 2020 clearly indicates the financial benefits that will come with adopting a vegetarian diet. But are Americans ready to give up meat? Well…

And this figure is expected to surpass the $30 billion mark by 2026.

Plant-based foods grew by 11% in 2019 because more people are enjoying the benefits of food that tastes the same as meat but is healthier.

Can you imagine a meat-free food industry? It’s tough, we know. But after reading these stats, the concept doesn’t seem so far fetched after all.

These vegetarian statistics speak volumes. There are a substantial number of moral, economical and health reasons that prove following a vegetarian diet is the way to go.

We hope our collection of interesting vegetarian stats has inspired you to hop aboard the veggie train.

What do you say? Are you going all green? Let us know in the comments below.