21 Eye-Opening Obesity Statistics – How Serious Is This Problem? 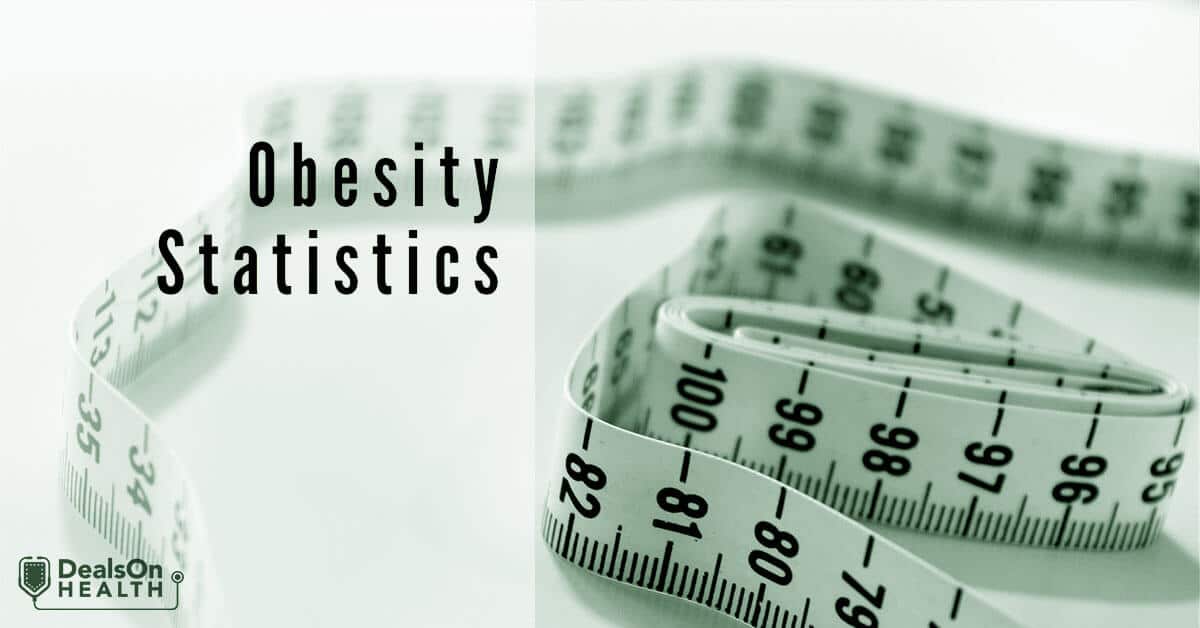 Obesity is a serious medical condition where fat is excessively accumulated in the body. It increases the risk of developing further health problems, such as heart disease, hypertension, diabetes, and more. Obesity statistics have also shown that millions of people die as a result of it.

Unfortunately, throughout the years, obesity has only increased globally. Furthermore, obesity rates have also shown that it has nearly tripled since the ‘70s.

That is why we’d like to present a list of statistics to raise awareness of this ever-present and pressing issue that many people face daily. 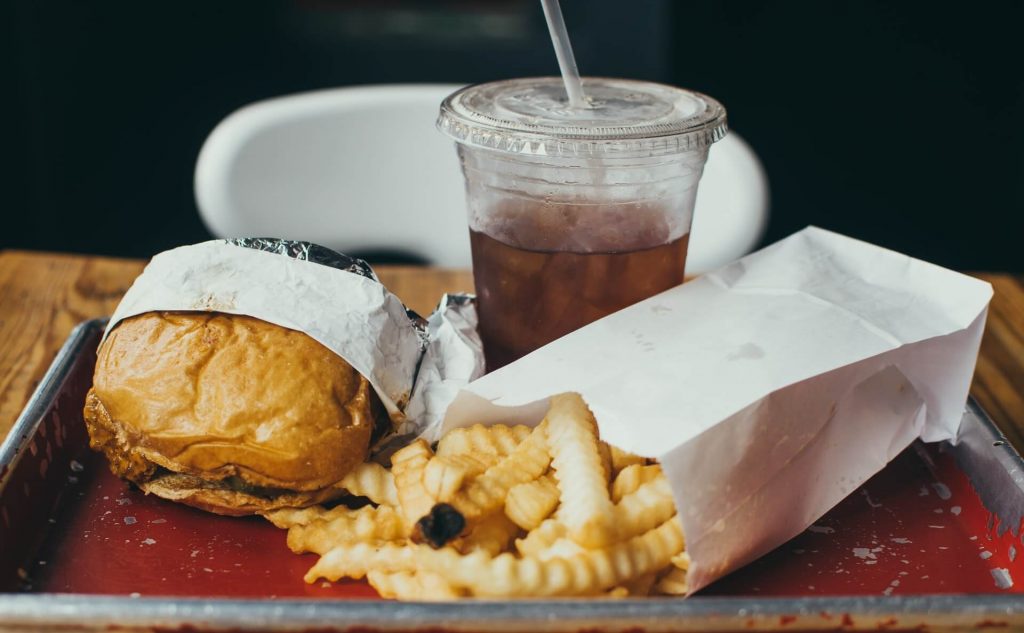 The US is among the top 20 most obese nations in the world. Yet, to treat obesity and obesity-related medical conditions, Americans spends billions of dollars each year. That’s why looking into the obesity rate in the US is essential in the effort to raise awareness.

Four out of ten American citizens suffer from obesity. If you include the overweight individuals, the percentage rises to 73.6%. The American obesity rate is way too high for comfort, seeing as this disease can cause multiple health problems.

2. Mississippi has the highest obesity percentage in the US.

If we look at each state’s obesity statistics, it is clear which state has the highest obesity prevalence. Based on data on the topic, almost 41% of individuals who live in Mississippi are considered obese.

3. Colorado has the lowest obesity rate in the US.

The percentage of obese Americans in Colorado is only 23.8%. Although still not a relatively low number, it is considerably lesser than other US states. So, we can safely state that Colorado is the healthiest American state when it comes to obesity.

4. The US obesity rate across all states doesn’t go lower than 20%.

These statistics show that obesity is one of the most significant healthcare issues the US is facing. The fact that the obesity rate across all US states doesn’t go lower than 20% is alarming.

Obesity Demographics in the US 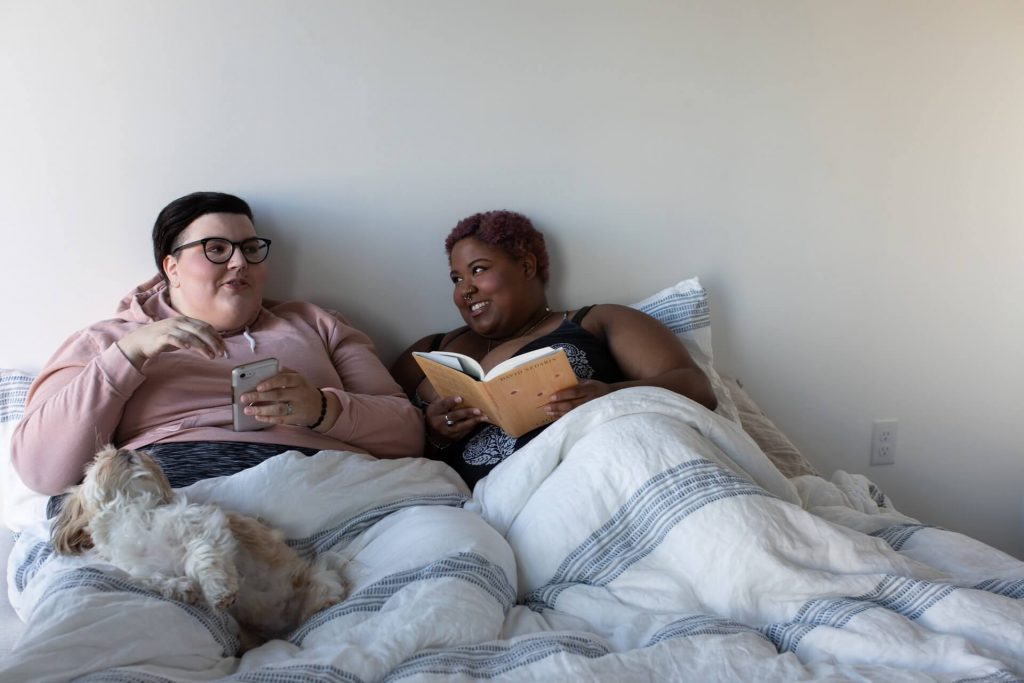 The obesity rate varies among different backgrounds, races or ethnicity, ages, and economic status. Some groups of people just have a higher tendency to be obese than others. To find out more about the demographics of obesity in the US, continue reading.

5. At 40.7%, African Americans have the highest obesity rate in the United States.

On the other hand, white Americans only have an obesity rate of 30.4%. This disparity in American obesity statistics is controversial, but likely factors include environment, diet, and exercise. African Americans have a higher fast food consumption than white Americans, as shown by a fast food and obesity statistics report done by the CDC, so this could be a contributing factor.

6. At 12.7%, Asian individuals have the lowest obesity rate in the United States.

Having an obesity percentage that’s lower than the American average in each state, the Asian population of the country is undoubtedly the least obese. Their cultural eating habits may contribute to this, which includes a lesser consumption of fast food.

They are the adult age group with the highest obesity rate in the United States. Next to them, obesity rates in America show that adults aged 60 and above come next at 42.8%, and those between the ages of 20 and 39 come last with a 40% adult obesity rate. As usual, when we talk about obesity in America, statistics like these are pretty alarming.

9. Women are more likely to be obese than men.

10. People with low income tend to be more obese.

Trends clearly show a higher number of low-income individuals with obesity problems. To be exact, 30.6% of those who have a yearly income lower than $36,000 are obese. That must be because eating healthy has become increasingly more expensive. 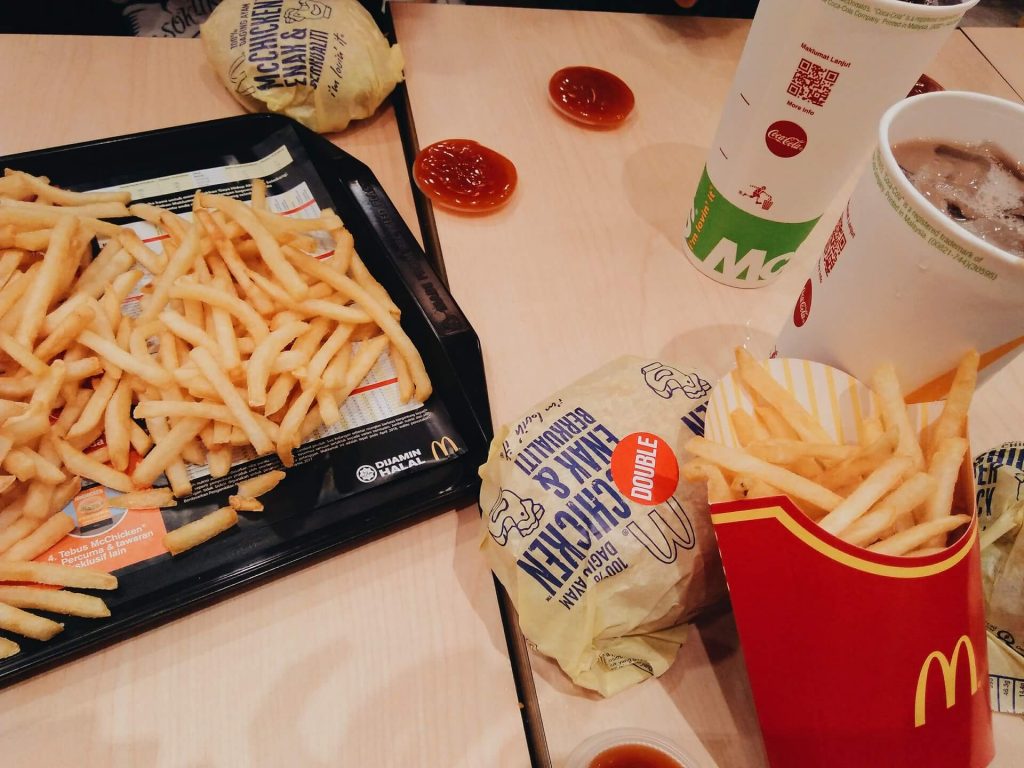 Obesity can start as early as childhood in many people—a fact that is concerning and alarming. Based on statistics, improper nutrition is the number one factor for childhood obesity. Children should be taught a healthy lifestyle and be introduced to wellness.

Before reaching this astounding number, as calculated from current child obesity statistics, it is first expected to reach 206 million by 2025. Given our everyday eating habits and lack of efforts to prevent obesity, this is not far from happening. According to predictions by the World Obesity Federation taken from current obesity data, China will have the highest number of obese individuals aged 5 to 19 by 2030.

As mentioned above, obesity is not something to take lightly, especially not when the person who suffers from it is only a child. When it comes to childhood obesity statistics in America, 14.4 million kids are reported to be obese.

This age group has the highest prevalence of childhood obesity in the United States. Children between the age of 6 and 11 come next at 20.3%, and those between 2 and 5 years old come last at 13.4%. Therefore, educating oneself on childhood obesity facts and statistics is essential, especially since obese children are highly likely to grow up into obese adults.

15. Hispanic and African American children have the highest prevalence of obesity.

There is a difference in obesity trends among various age groups, but there is also a difference among different races. For example, the percentage of obese Hispanic children is 25.6%, while Black children have a rate of 24.2%. Both of these childhood obesity stats surpass the 16.1% prevalence rate among white children.

16. Asian children have the smallest percentage of childhood obesity.

While Hispanic children have an obesity rate of 25.6%, only 8.7% of Asian children in the United States are obese. This is a big problem because obesity can lead to diabetes.

17. Kentucky has the highest obesity rate among youth aged 10 to 17.

According to Kentucky’s adolescent obesity statistics, 23.8% of youth aged 10 to 17 are obese. This rate has steadily increased from 19.6% in 2016. That’s why it comes as no surprise that the state ranks fifth in adult obesity, with 36.5% of its adult population being obese. One of the facts about childhood obesity is that obese children likely grow up to be obese adults.

The youth obesity rate in Utah is 9.6%, which is the lowest among all states of the United States. Unfortunately, this rate hasn’t changed much from 9.5% in 2016. However, it’s worth reporting that despite having the lowest youth obesity rate, 29.2% of adults in Utah are obese. 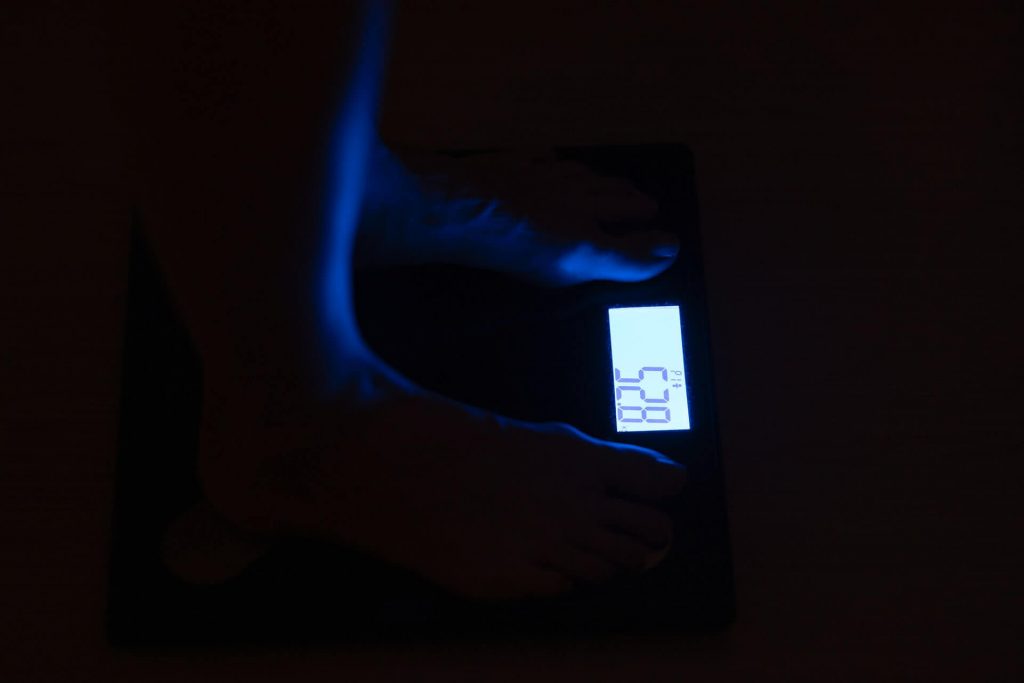 Obesity increases the likelihood of developing many health conditions, such as diabetes, hypertension, and heart disease. In the following statistics, we will focus on the correlation between obesity and heart disease.

Another one of the many facts about obesity is that it can lead to fat buildup in your arteries. If these arteries get clogged or damaged, heart disease can ensue. This severe threat is why obesity is nothing to scoff at. According to CDC obesity statistics, obesity is one of the five top factors that increases your chances of developing heart disease.

When it comes to the number of deaths worldwide caused by heart disease, the total sum reaches 17.9 million. If the worldwide obesity rate decreases, so would this tragic number, seeing as obesity increases the risk for heart failure.

This really makes you wonder how much of these heart disease deaths have stemmed from obesity. We can’t know the exact number for sure, but we know that the effective prevention of obesity can save many lives. 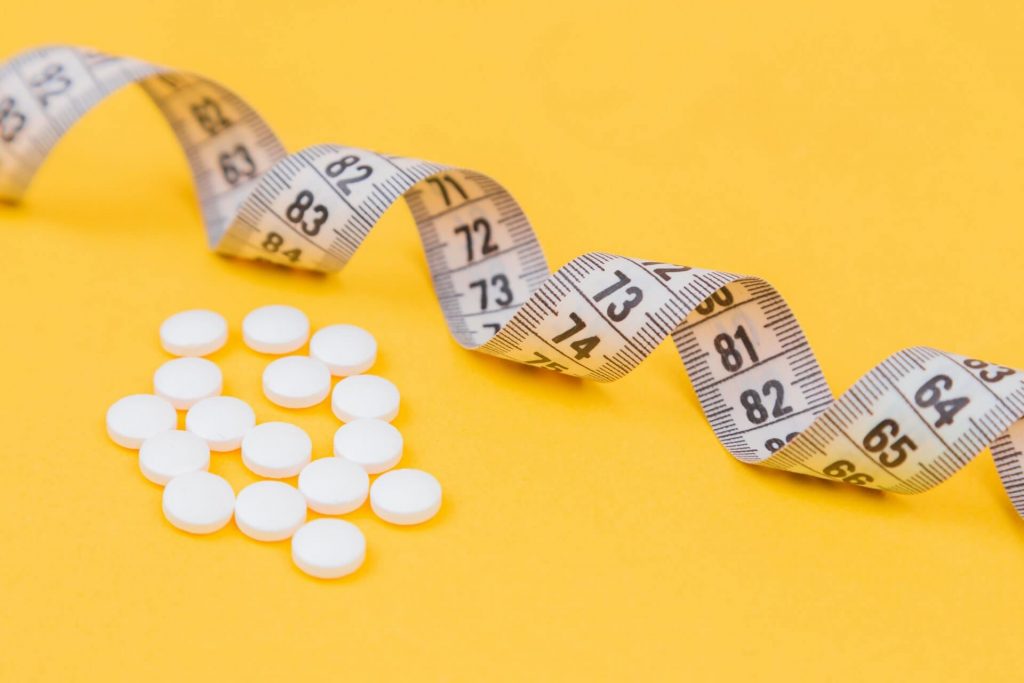 There are always differences in statistics between countries. Whether it’s because of cultural differences or standard of living, it is important to see how different countries fare. As such, we created a list of statistics with the least and most obese countries worldwide.

22. There are 650 million obese adults globally.

Out of 2 billion adults who are reported to be overweight, 650 million are obese. This equates to 13% of the worldwide adult population.  What’s more, global obesity rates have nearly tripled since 1975 and it’s estimated that most of the global population lives in countries where more people die from being obese than being underweight.

23. By 2025, it’s projected that obesity statistics worldwide will reach 1 billion.

If the current upward trend in obesity does not slow down, there will be an estimated 1 billion obese adults worldwide by 2025. Out of this number, 177 million adults are projected to be severely or morbidly obese. Also, if we combine the projected overweight and obesity statistics, the number is estimated to reach 2.7 billion.

24. 2.8 million people die each year as a result of  being overweight or obese.

Globally, obesity has become an epidemic with the number of deaths it causes annually. Obesity used to be a problem only in high-income countries, but as we’ve seen from obesity statistics in 2021, its reach has extended into middle and low-income countries now.

With a population rate of only 10,000 individuals, the small island is undoubtedly the most obese country in the world. Most citizens of this small country have type 2 diabetes.

Faring rather better than the US, the UK has considerably fewer individuals struggling with obesity. Based on recent information on obesity rates by country, the UK has an obesity rate of roughly 28%. On the other hand, 36.2% of the UK population are overweight but not obese.

According to recent obesity statistics, Vietnam is the country with the least percentage of obese citizens. As such, only 2.1% of the southeast Asian country’s citizens are obese. They, however, have problems with people being underweight.

As shown by the obesity stats above, obesity is a massive problem in the US and worldwide. The rates when it comes to this medical condition are through the roof in almost every country globally, with the US obesity statistics being high on that list.

This condition can lead to at least 60 other medical issues, such as sleep apnea, heart disease and diabetes, all of which are severe and some life-threatening.

Raising awareness of current and future obesity rates can inspire people to take action and want to get better. Although these statistics are dire, we can improve them, along with people’s health. The key is in not giving up.

Obesity is generally caused by high consumption of sugar and fat and a low amount of daily movement. The problem doesn’t necessarily reside in the high caloric intake of a person, as much as the lack of exercise. For individuals to consume high amounts of sugar and fat without gaining weight, they have to burn all the energy they consume.

What is the obesity rate in America?

The obesity rate in America is 42.5%, making the country rank 12th in obesity worldwide. Aside from higher mortality rates caused by obesity and obesity-related diseases, recent statistics on obesity in America show that the medical care cost of obesity racks up to $150 billion each year.

Whether it’s because of lack of movement and exercise, other health problems, or an improper diet plan, the fact of the matter is that nearly half of the American population is battling obesity.

What is the fattest state in America?

On the other hand, Colorado has the lowest obesity rate among all states, with only 23.8% of its population being obese. This percentage is still high, though.

Where does America rank in obesity?

The US is ranked as the 12th most obese country worldwide. When looking at the United States obesity statistics, it’s clear that the obesity crisis is getting direr each year. Even childhood obesity is a huge problem, with 14.4 million children and adolescents in America being obese. If trends don’t change anytime soon, it could turn from bad to worse in the US.

What age group has the highest obesity rate?

Obesity percentages vary in different age groups, just as race, economic status, and gender affect obesity. However, according to recent statistics, the highest prevalence of obesity is registered for adults between 40 and 59. The obesity rate for this age group is 44.8%.

How many deaths are caused by obesity?

Based on statistics on the matter, obesity causes more deaths than being underweight. As previously mentioned, It is a medical condition that can lead to other health problems. Furthermore, approximately 300,000 individuals die yearly in the United States as a result of obesity. Therefore, getting acquainted with obesity statistics is very important to raise awareness.