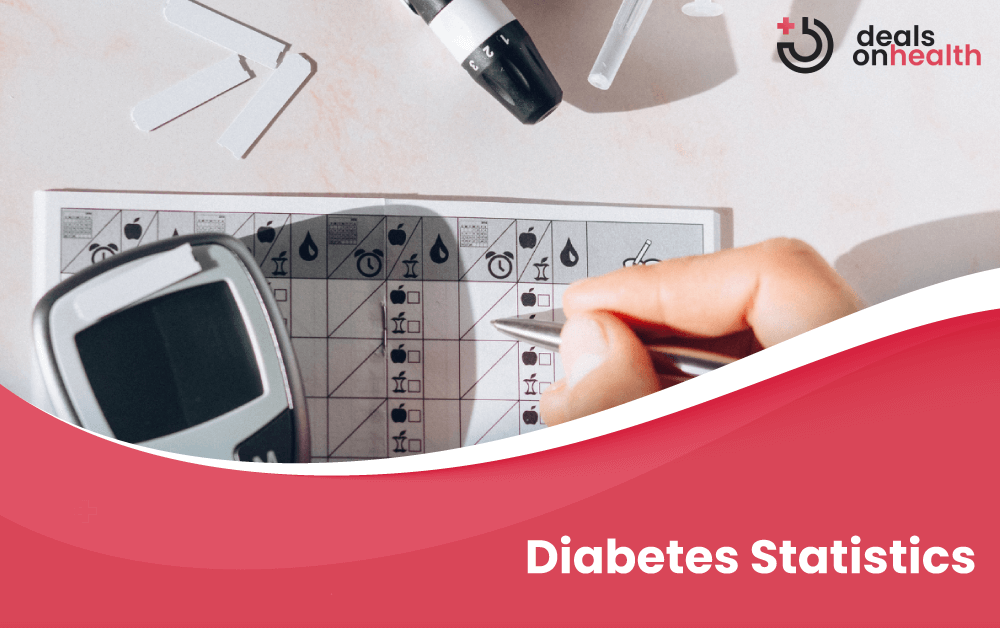 Diabetes statistics reveal a worrying increase in the number of people diagnosed with the disease. An even more frightening fact is that more than half of people with diabetes are undiagnosed.

Diabetes can cause various health complications, ranging from eye problems to kidney failure. Without proper management and regular check-ups, it can even lead to stroke, heart attack, or amputation.

We’ve compiled the most critical data to arm you with the knowledge needed to recognize and prevent diabetes or help you manage it properly and improve your quality of life.

The Most Important Diabetes Statistics for 2022 (Editor’s Choice)

According to the latest IDF Diabetes Atlas report, 1 in 10 adults live with diabetes. However, the most worrying fact is that nearly half (44.7%) are undiagnosed. Additionally, projections are that the number of diagnosed diabetes cases will continue growing rapidly, reaching 642.8 million by 2030 and 783.7 million by 2045.

As per prediabetes statistics, this figure is predicted to reach 531.6 million by 2045. Moreover, people with prediabetes have a 50% chance of developing diabetes in the next 5–10 years.

Diabetes stats show that this rate is projected to reach 369.7 million by 2030 and 440.8 million by 2045. Moreover, IFG is a sign of insulin resistance. It’s a type of prediabetes in which the blood sugar levels are above the normal range when fasting but still below the range needed for a formal diabetes diagnosis.

The latest diabetes facts reveal that 24 million African adults are diagnosed with diabetes. That said, Africa is also the continent with the most significant proportion of people with undiagnosed diabetes (54%). Furthermore, Africa will see a 129% increase in diabetes cases, reaching 55 million by 2045.

6. 61 million adults living in Europe are diagnosed with diabetes.

This means that 1 in 11 adults lives with diabetes. Furthermore, the disease affects approximately 10.3% of men and 9.6% of women. The diabetes prevalence in Europe has dramatically risen in the past few years due to the increase in obesity, physical inactivity, and unhealthy diets. Moreover, projections are that the number of people with diabetes will jump to 67 million by 2030.

7. With 15.3%, Germany has the highest prevalence of diabetes in Europe.

Furthermore, diabetes rates by country reveal that Portugal has the second-highest percentage with 14.2%, followed by Malta with 12.2%. On the other hand, Ireland is at the bottom with a prevalence of only 4.4%.

8. One in 11 adults in South-East Asia is living with diabetes.

South-East Asia counts more than 90 million adults with diabetes. The number is projected to reach 113 million by 2030 and 151.5 million by 2045. These diabetes rates indicate that over 16.8% of people with diabetes live in the SEA region.

9. China has the highest number of people with diabetes globally—140.8 million.

Following China is India with 74 million, Pakistan with 32.9 million, and the US with 32 million. Furthermore, high type 1 and type 2 diabetes rates by country are also observed in Indonesia (19 million), Brazil (15.7 million), and Japan (11 million).

10. With 11.9%, the Western-Pacific region has the third-highest prevalence of diabetes worldwide.

Diabetes affects 205.6 million adults in the WP region, and it’s projected to increase by 27%, reaching 260 million by 2045. Currently, the WP region accounts for nearly 40% of the total number of adults with diabetes. Finally, the prevalence of diabetes in the WP region threatens to reach 14.4% by 2045.

11. More than 32 million people in the US live with diabetes.

12. 88 million US adults have prediabetes.

United States diabetes statistics show that they live with higher-than-normal blood sugar levels that aren’t high enough to be diagnosed with diabetes.

An even more worrying fact is that 84% of those with prediabetes go undiagnosed. This puts them at an increased risk of developing type 2 diabetes but also heart disease.

13. With 15.7%, West Virginia is the US state with the highest rate of diabetes.

14. 14.7% of people with diabetes are American Indians/Alaska Natives.

15. Approximately 11.7 million people with diabetes fall within the 45–64 age range.

16. The prevalence of type 2 diabetes among children and teenagers increased by 95% in 16 years.

This unsettling data indicates the importance of prevention or early intervention to alleviate the impact of diabetes. As a result, experts now advise people to do diabetes screening at 35 instead of 40, as earlier recommended in the 2015 US Preventive Services Task Force guidelines.

18. The percentage of Americans with diabetes is the highest among those older than 65—26.8%.

The percentage of adults with diabetes increases with age. The CDC survey suggests that 26.8% of Americans aged 65 or older are diagnosed with diabetes. Furthermore, 17.5% are between 45 and 64 years old, whereas the 18–44 age group accounts for 4.2% of diabetes cases.

Type 1 diabetes is an autoimmune attack on pancreas cells. It prevents them from creating insulin, so people with this disease need to take insulin shots daily. Type 1 diabetes is usually diagnosed at an early age, but it can manifest in adults as well. Approximately 5.2% of Americans are diagnosed with type 1 diabetes, including approximately 187,000 children and adolescents.

Additionally, numbers indicate that diabetes type 1 incidence is 15 per 100,000 people. According to results from multiple studies, these numbers are increasing worldwide.

The number of type 1 diabetics in the US is significantly lower than those diagnosed with type 2 diabetes. The risk is highest for white people younger than 20 who have a parent or sibling with type 1 diabetes. In fact, having a first-degree relative with a type 1 diagnosis increases the chances for children to have it by 12%.

Type 1 diabetes is often referred to as juvenile diabetes since it’s often detected in young people and children. Generally, type 1 diabetes is diagnosed before the age of 40. However, most diagnoses are established in children aged 4–14.

Type 2 is the more common diabetes type in the US, accounting for up to 95% of all cases. This type of diabetes causes glucose in the blood to become too high, which results in symptoms like tiredness, excessive thirst, blurry vision, and fatigue, to name a few.

26. One study discovered that 86% of type 2 diabetes patients are overweight.

27. Losing 5–7% of the body weight can decrease the chances of developing type 2 diabetes by 58%.

This number is even more significant for older people. According to the same study, weight loss can decrease the risk of diabetes by 71%.

28. 5,758 children and teens are diagnosed with type 2 diabetes each year.

Child type 2 diabetes statistics based on the CDC report revealed that the number of cases among children and teens younger than 19 is rising. In addition, the number of newly diagnosed cases increased by 8.5% among Asian non-Hispanic and Pacific Islanders and 6.3% among non-Hispanic white youths.

Statistics About Diabetes Costs and Expenditures

The most significant expenditure components include patient care at the hospital, prescribed medication, anti-diabetic agents and diabetes supplies, and visits to the physician’s office. In addition, the costs are predicted to rise, reaching $388.9 billion by 2030 and $392.5 billion by 2045.

30. The estimated health expenditure of a person with diabetes in the US is $11,779.

Stats on diabetes also predict that the cost will increase to $12,073 by 2030. On average, the cost of medical expenditures of people with diabetes is approximately twice as high as those without diabetes.

31. The North America and Caribbean region spend $414.5 billion on health care for people with diabetes.

Furthermore, statistics about diabetes and related expenditures point out that Europe is the second-highest ranked region with $189.3 billion. On the other hand, health expenses are lowest in Africa and South-East Asia, with $12.6 million and $10 million, respectively.

These costs include Medicare, Medicaid, and military insurance. That said, diabetes statistics indicate that private insurance covers about a third of the diabetes-related medical expenses, while uninsured people cover about 2%.

WHO numbers show that diabetes was the ninth leading cause of death. The disease was listed among the top 10 causes of death after experiencing a significant surge of 70% since 2000. Moreover, diabetes accounts for a substantial rise in male deaths, noting an 80% increase in the past two decades.

35. Up to 50% of patients with coronary artery disease have overt diabetes.

Diabetes and heart disease statistics highlight a correlation between these two conditions. For example, up to 75% of coronary artery disease patients have diabetes or abnormal glucose regulation. More specifically, approximately 20% are undiagnosed, and 25% have defined prediabetes.

36. In the United States, diabetes accounts for 87,647 deaths annually.

According to the most recent numbers, the diabetes death rate is 10.6%. Therefore, the total number of deaths per 100,000 is estimated at 26.7. Currently, diabetes is the seventh-leading cause of death in the US. Additionally, it contributes to deaths from stroke and heart disease.

37. Every day, 230 people with diabetes in the US suffer an amputation.

One in three people with diabetes older than 50 has a peripheral arterial disease—a condition where atherosclerosis affects the limb. Diabetes amputations statistics reveal that about 85% of these amputations result from a diabetic foot ulcer. Furthermore, African Americans are four times more likely to suffer amputation related to diabetes than Whites.

Diabetic rates show that patients hospitalized with severe symptoms of coronavirus also developed diabetes. Additional research is still needed to determine whether this occurrence is directly affected by the coronavirus or is caused by COVID-19 treatments.

Gestational diabetes is usually diagnosed between the 24th and 28th week. During pregnancy, high blood glucose levels can cause problems for your babies, such as large weight, breathing problems, and premature birth.

40. People with type 2 diabetes are 15% more likely to die prematurely.

In addition, the type 2 diabetes death rate is higher in people younger than 65, those with kidney damage caused by diabetes type 2, and people with diabetes who fail to control their blood sugar levels adequately.

41. People with diabetes are 20% more likely to be diagnosed with anxiety.

Many researchers have found a connection between diabetes and anxiety. For example, a study pinpoints that in any 18 months, up to 50% of people suffer from diabetic distress that stems from feeling worried, discouraged, or tired of dealing with diabetes care.

The latest stats confirm that diabetes is a global issue. The disease can lead to serious health problems, many of which are severe, while some are life-threatening. In fact, diabetes is the seventh top cause of death in the US and ninth worldwide.

Even though some risk factors of developing diabetes can’t be changed, making specific lifestyle changes—like working out regularly, maintaining a healthy weight, and eating right—can significantly decrease the chances of developing it.

What percentage of the population has diabetes?

The number of patients diagnosed with diabetes is growing on a global scale. In fact, 1 in 10 adults live with diabetes, totaling 537 million people. These numbers indicate that more than 15% of the world’s population suffers from this chronic disease. According to future predictions, the number of diagnosed diabetics will reach 643 million by 2030 and a whopping 784 million by 2045.

What population is most affected by diabetes?

What is the mortality rate of diabetes?

Diabetes is considered the ninth leading cause of death globally and seventh in the US. This chronic disease accounts for approximately 1.5 million deaths annually, and 87,647 deaths occur in the US. Additionally, diabetes is one of the top causes of premature deaths—nearly half of all deaths caused by diabetes occur before the age of 70.

How many people in the US have diabetes?

Diabetes has been increasing at a rapid pace in the United States. According to the latest survey by Diabetes Atlas, 32 million of the US population has diabetes. This means that the condition affects 10.7% of the US population. Furthermore, the number of diabetes cases is expected to continue to rise. By 2030, it’s estimated to reach 34 million, and by 2045, the total number of cases will amount to 36 million.

What percentage of diabetes patients have type 2?

Type 2 diabetes is a condition in which the body can’t correctly regulate and use glucose. As a result, there’s too much sugar circulating in the blood, which can cause numerous health issues. Known as adult-onset diabetes, type 2 diabetes is widespread and affects 90–95% of the global population. T2D can also develop in younger people, especially if they are obese.

What percentage of people with diabetes have type 1?

Type 1 diabetes is a condition in which the pancreas doesn’t produce or produces little insulin. This type of diabetes is also known as juvenile or insulin-dependent diabetes. Even though it usually develops in children and teenagers, it might develop in adults, too. Type 1 diabetes is less common and affects only 5–10% of diabetic people worldwide. In the US, the prevalence of T1D is 9.5%, as per the latest diabetes statistics.