Alcohol has always had an influence on our day-to-day life. It is a frequent guest at feasts and celebrations, and it is known for bonding people. Nowadays, the alcohol industry is booming — the latest alcohol industry statistics suggest that the industry is worth a whopping $1,324.1 billion.

In this article, we’ll take a deep dive into the numbers behind this massive industry. Get ready to expand your knowledge of alcohol as we’ve prepared some fascinating facts and numbers.

All eyes will be on you next time you hit the bar, and someone starts discussing alcoholic beverages. Moreover, you could most certainly impress the dads at the Sunday BBQ with your profound knowledge. Whatever the case, we know that you’ll find this information very helpful. 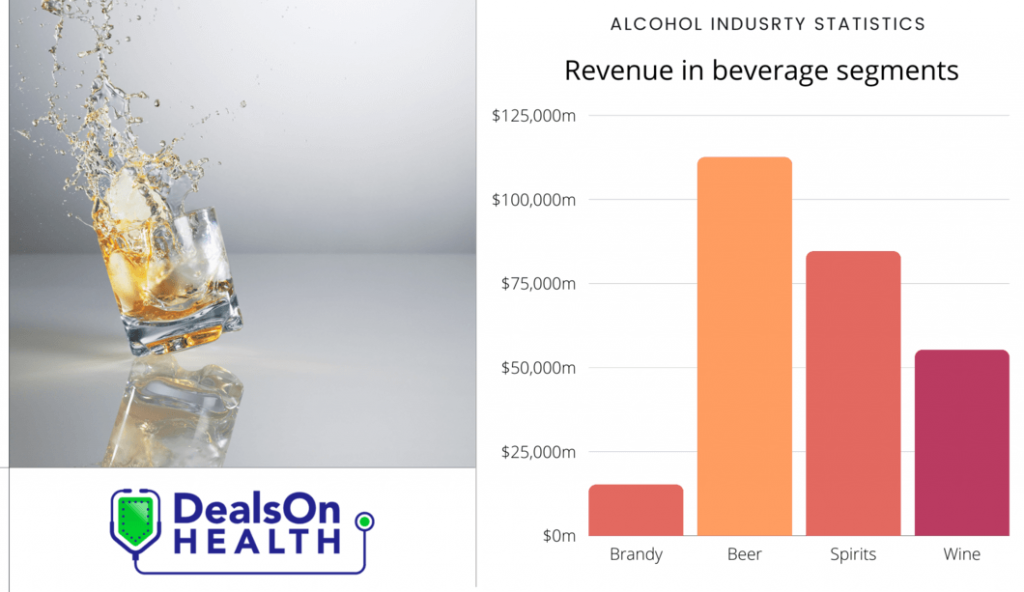 1. Alcohol purchase statistics point to a 7.9% annual growth of the alcohol industry.

Interestingly, the beer segment is the largest. Its market volume is estimated to be $101,847 million in 2020.
Generally speaking, most alcohol industry’s revenue is generated in the US. A whopping $222,098 million in 2020 make it one of the biggest markets.

In addition to that, the vodka market share is expected to have a steady annual growth of 8%. The number is anything but surprising, considering that the average per capita consumption stands at 0.3 liters.

Most of the vodka market revenue is generated in the US — $18,803 million with as much as $5.65 generated per person.

3. Americans spend 1% of their gross yearly income on alcohol.

Alcohol spending statistics reveal that the average spending on alcohol across all households in the US is 1% of one’s yearly income. Compared to stats on alcohol from previous years, there is a small increase of 0.1%.

For comparison, Americans spend 1.3% of their annual income on personal care products and services, so this statistic shouldn’t be taken lightly.

4. China’s national liquor Baijiu accounts for 99.5% of all alcohol consumed in the country.

Baijiu is a clear, colorless liquor typically coming between 35% to 60% alcohol by volume. It is most comparable to whiskey by its complexity of flavor and sensation.

China, Baijiu’s homeland, is a major alcohol-producing country, and it has been exporting all sorts of drinks. It is quite surprising that, while the country produces world-renowned alcoholic beverages of all kinds, most Chinese people prefer the national liquor Baijiu, as the alcohol consumption trends reveal. 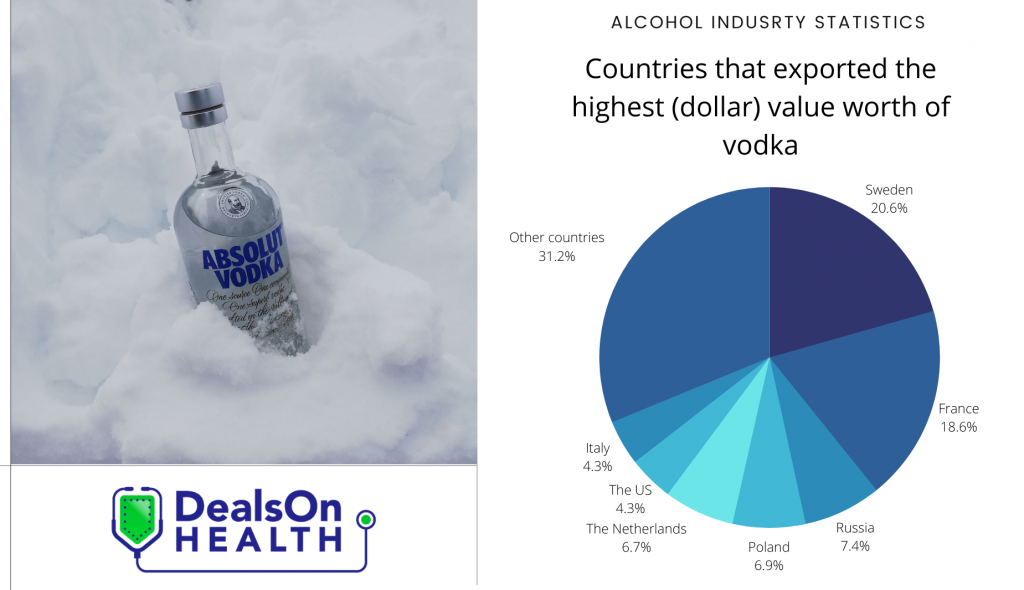 5. Sweden’s vodka export amounts to 20.6% of the global exports.

Although Russia is amongst the heaviest drinking countries when it comes to vodka consumption by country, it isn’t exporting vodka as much. Interestingly, Sweden’s global market share for vodka is significantly bigger than Russia’s. The Swedes contribute with 20.6%, whereas Russians only have 7.4% of the market share — coming in third after France with 18.6%.

In fact, 89.9% of the world’s global vodka export comes from only 15 countries. Unsurprisingly, some of the world’s largest alcohol companies that export vodka are located in those countries.

6. 90% of the worldwide cognac sales are Very Special (VS) and Very Superior Old Pale (VSOP).

When it comes to this variety of brandy, people tend to buy VS and VSOP cognacs. Most sales are attributed to cocktails and the balance served on the rocks, with or without soda. Another interesting thing is that high-end cognacs classified as XO (extra old) contribute to 10% of the industry’s sales.

7. About 15% of the alcohol consumed in Latin America is illicit.

Beer is the least likely type of alcoholic beverage to be illicit with a 10.2% contribution to global illicit alcohol consumption.

That said, it seems that people can easily find their way around buying original brands. Unfortunately, the consumers willingly or unwillingly contribute to the fiscal loss of billions of dollars in unpaid taxes.

While some Latin American countries contribute less to these numbers, others report staggering percentages of illicit alcohol consumption, including Peru’s 56% and Colombia’s 52% of counterfeit and unregistered brands. 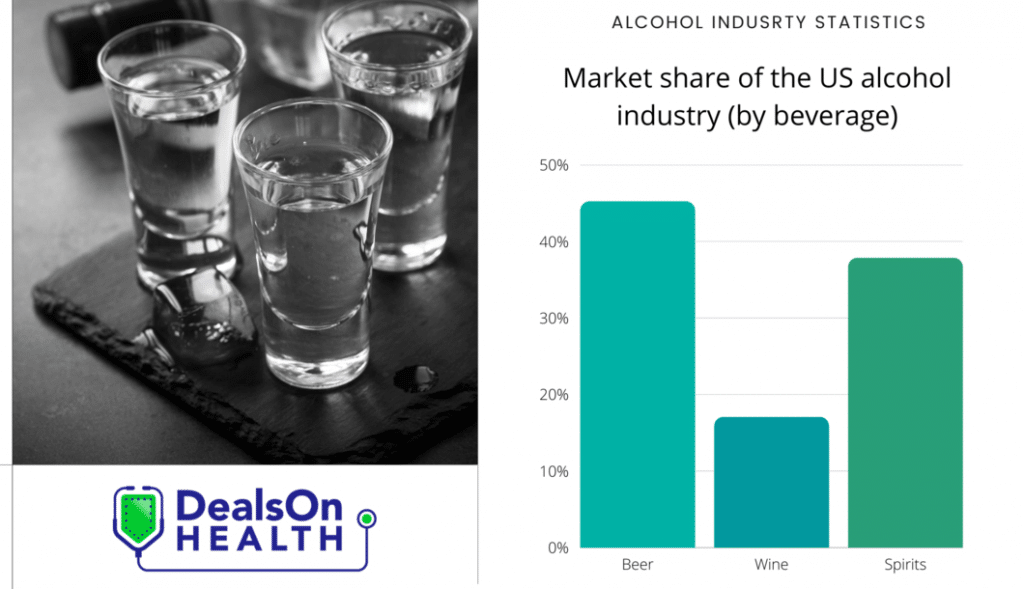 8. Online alcohol sales in the US jumped 243% during the coronavirus outbreak.

During the COVID-19 outbreak, total alcohol sales skyrocketed as the average price of alcohol in the US increased due to the higher demand. People bought the most popular liqueurs in America altogether.

We don’t think that the percentage of people who drink increased, but it sure seems like people wanted to fill up their pantries before the lockdown.

9. Around 30% of 15-year-olds report that they have had at least one drink in their lives.

According to the 2018 National Survey on Drug Use and Health (NSDUH), about 7.1 million people ages 12-20 reported drinking alcohol in the past month.

Binge drinking is just as frequent in this age group — as many as 4.8 million people ages 12-20 admitted to binge drinking in the past month.

10. 45% of all alcohol sales in the US were generated by beer sales.

Although the amount of consumed beer has decreased, it is still the most popular drink amongst Americans. It comes first right before spirits with 37.8% and wine with 17%.

According to alcohol sales statistics, wine sales haven’t experienced any significant changes in the past decade, whereas spirits are gaining more popularity. 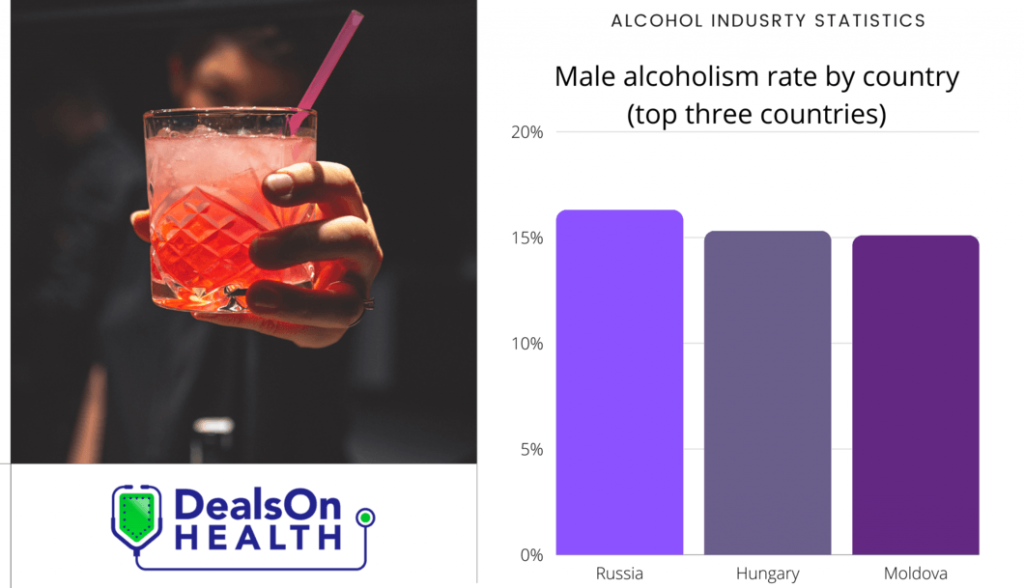 The wine segment revenue for 2020 is calculated to be $323,501 million with expectations that it will continue to grow by 9.8% annually. In addition, the US has generated the highest wine sales revenue of $44,478 million in 2020.

12. The US is the world’s largest wine consumer with 33 million hectoliters consumed in one year.

The US is the leader when it comes to wine consumption by country. Its residents have consumed 33 million hectoliters in 2019 alone.

According to wine consumption statistics, around one-third of US Millennials consume wine on a daily basis. In fact, Millennials outperformed Baby Boomers in this regard in 2019.

Most Millennials are conscious buyers meaning they prefer sustainable and organic wine. What’s more, they are attracted to interesting logos, fun designs, and catchy names. 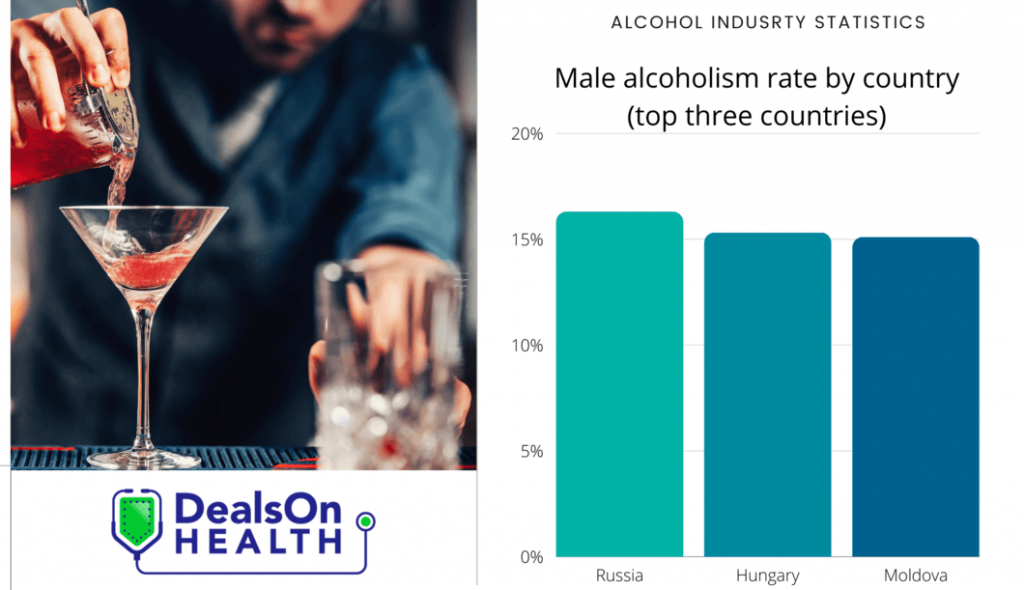 Alcohol abuse can cause massive problems and, in some instances, may lead to death. It is the cause of 5.3% of deaths worldwide, according to the World Health Organization.

In other words, 3 million is the number of alcohol-caused deaths per year. In addition, alcohol is the cause of numerous diseases and injuries and cause other problems, such as phobias and anxiety (check out our phobia statistics).

15. Russia has the highest male alcoholism rate by country.

Alcoholism is the most common substance use disorder. It is characterized by uncontrolled drinking due to emotional and physical dependence and preoccupation with alcohol. The latest data is a bit old and comes from 2004.
According to the World Health

Organization’s alcohol addiction statistics, Russia has the highest rate of male alcoholism — 16.29%, followed by Hungary with 15.29% and Moldova with 14.08%.

When it comes to female alcohol use disorder, Australia is taking the lead with 2.61%. Alcohol use statistics show that Australian women are followed by Russian (2.58%) and Norwegian (2.55%) women.

16. 25% of Russian men die before 55 due to excessive alcohol drinking.

According to statistics on alcohol consumption by age, Russia has the highest death rate of men under the age of 55 due to alcohol abuse. The country is amongst the world’s leading consumers of vodka with more than 2 billion liters being consumed annually.

For comparison, alcohol abuse is the cause of death of only 1% of men in the US and 7% of men in the UK under the age of 55. It should be noted that, according to previous studies, 3 liters of vodka is the average alcohol consumption per week for 35% of Russian men.

17. Alcohol abuse is responsible for 7.1% and 2.2% of the global burden of disease for males and females respectively.

According to studies by the World Health Organization, alcohol abuse is accountable for disability and premature mortality amongst people aged 15-49. In fact, it causes up to 10% of all deaths in this age group.

Usually, people from vulnerable groups have higher death and hospitalization rates due to alcohol misuse. On a global scale, 3 million people die of alcohol every year.

If you love drinking, you might want to take it down a notch. According to studies, alcohol is a risk factor for many malignancies.

So far, it has been linked to oropharyngeal, larynx, esophageal, breast, and colon cancer, among others. In 2012, 5.5% of all cancer occurrences were linked to alcohol, and 5.8% of all deaths were attributed to alcohol.

The most harmful effects are often linked to heavy and long-term alcohol use, but even modest drinking might affect the immune system and increase the risk of cancer.

19. Alcohol addiction is the most common substance abuse disorder in the US affecting 5% of all Americans.

Addiction is an indescribably serious problem. According to official alcohol abuse statistics, alcohol abuse is the most common type of addiction in the US.

Alcoholism is the medical term for alcohol use disorder, and this condition affects 5% of Americans every year. Sleep apnea statistics can tell you more about some other problems that the excessive use of alcohol can cause.

21. 40.3% of people have the habit of calling a friend or a partner to pick them up when under the influence.

Other interesting DUI facts suggest that 25.7% of people prefer to share a ride, while 10% simply walk home. Thankfully, most people are fully aware of their drinking limits — as many as 30.5% don’t think they have a high tolerance and don’t plan on driving after drinking.

In addition, 30.8% believe that drivers should lose their license temporarily after driving under the influence. Interestingly, 28.1% of people believe that it should take two DUIs to lose your license permanently. 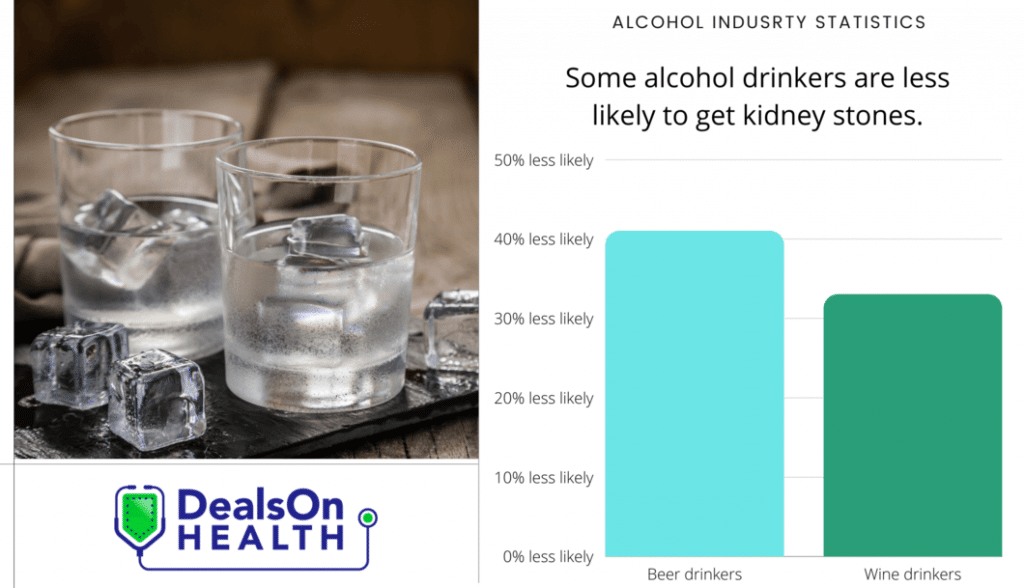 Stay for One More Round

Humankind has undoubtedly seen lots of benefits of alcohol use. However, we all witnessed a lot of chaos created by it, too. That said, the alcohol industry statistics mentioned above reveal that regardless of our personal experience with it, alcohol is embedded in the fabric of our society.

We must also state the importance of drinking responsibly. If we drink moderately, we can ensure a safer environment for everyone.

How big is the alcohol industry?

The US alcohol market share amounts to $1,371,385 as of the first half of 2020. Around 44% of the alcohol industry’s worth is attributed to places like bars and restaurants. In 2017, the alcoholic beverage industry was valued at $1,438 billion.

It’s expected to grow, and it should reach $1,684 billion by 2025. The biggest alcohol market share belongs to beer, wine, and spirits.

What percentage of people drink alcohol?

As global alcohol intake increased by 70% from 1990 to 2017, it is expected that as many as 50% of adults worldwide will consume alcohol.

Interestingly, before 1990, high alcohol intakes were common in high-income countries.

What is the most consumed alcohol in the world?

Drinks statistics suggest that beer is the most consumed alcohol in the world – both on regulated and unregulated alcohol markets.

Beer has many variations and is much lighter than other alcoholic drinks. Also, the beer nutrition facts reveal that it is cheaper and easier to produce, thanks to the common ingredients found in this beverage.

What drinks are trending?

At the moment, the drinks trending internationally are spirits. The most popular ones are tequila, bourbon, and whiskey, as well as pre-mixed cocktails.

Of course, wine and beer (including ciders) are still top choices amongst alcohol consumers.

Which country is the largest producer of alcohol?

The US is the largest producer of alcohol in the world. The country isn’t focused on one thing as it produces a whole range of alcoholic beverages.

Among all existing types of alcoholic drinks, wine and beer are hands down the most popular ones. The country acknowledges that and does everything to cater to the public’s taste buds.

The US accounts for 12% of the world’s wine production. Beer is making numbers as well — American beer manufacturers shipped 203,1 million barrels of beer in 2019.

Which country consumes the most beer?

What country has the highest rate of alcoholism?

Which country consumed the most alcohol in 2019?

In 2019, Moldova was the country that consumed the most alcohol per capita. On average, every citizen consumed 17.4 liters throughout the year. Moldova is closely followed by Belarus with 17.1 liters, while Lithuania is third with 16.2 liters per capita.

Which region has the lowest rates of high-risk drinking?

The Middle East and North Africa are the regions with the lowest rates of high-risk drinking. Alcohol industry statistics suggest that there are many factors that affect this. Wealth, regional culture, economic standards, and religion are the most important ones.