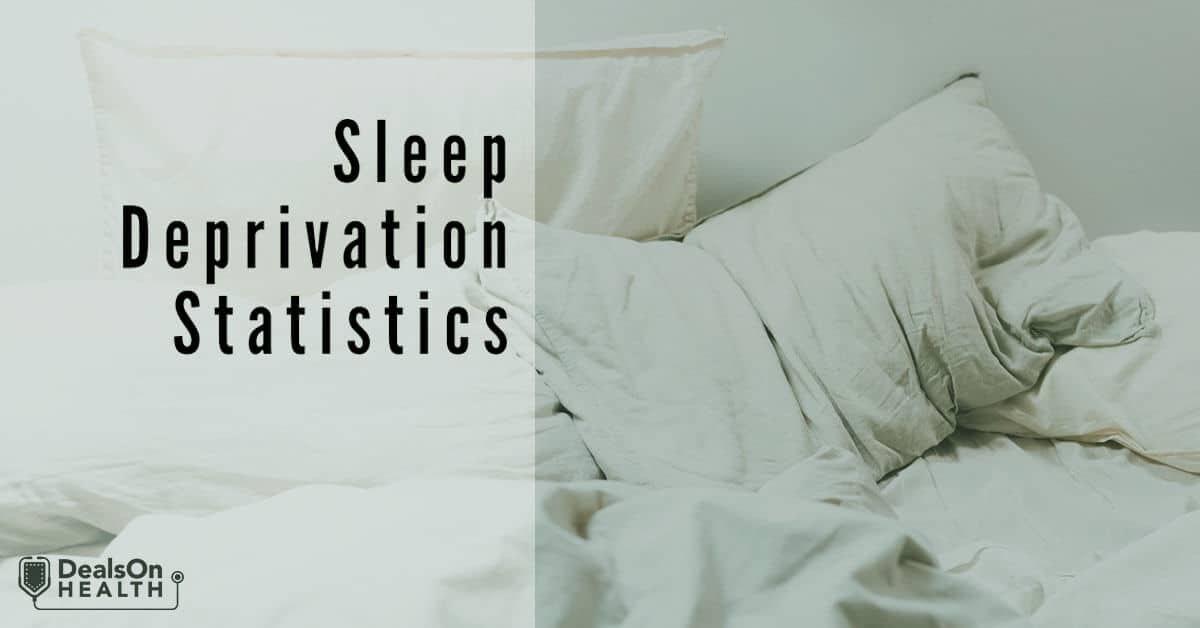 It’s no secret that a good night’s sleep is essential to our quality of life. While it’s widely accepted that we need 7–9 hours of sleep each night, we usually don’t get too upset when we occasionally miss out on some shut-eye. However, lack of sleep can lead to some severe health problems.

Sleep deprivation statistics show that at least one in three Americans don’t get enough sleep. Considering that the CDC recognizes sleep deprivation as a public health problem, it becomes clear just how important it is to maintain a healthy sleep schedule.

In this article, we will highlight the most important sleep deprivation facts and share some healthy sleep tips.

Eye-Opening Sleep Deprivation Statistics in the US (Editor’s Pick)

According to the CDC, the average amount of sleep for adults should be between seven and nine hours each night. Teenagers require a couple of hours more, while preschool children should sleep up to 13 hours within the 24-hour time frame.

2. 34% of US adults regularly take naps, with men more likely to take afternoon naps than women.

Pew Research Center napping statistics show that one-third of Americans like to nap during the day. This number is higher among the older population (52% for people over 80). While men and women aged 18 to 49 years report the same napping habits, men over the age of 50 are more likely to take naps than women in the same age bracket. Unsurprisingly, this sleep survey also showed that those who had trouble sleeping the night before were more likely to nap the following day.

3. Quality sleep is crucial for academic success, as it improves memory and learning abilities.

4. We go through five stages of sleep, with REM sleep constituting about 25% of our sleep time.

According to REM sleep definition, it’s a recurring stage of sleep characterized by low muscle tone, rapid eye movement, and dreams. Sleeping statistics and research show that our brain is the most active during REM sleep. This is when we have the most vivid dreams. REM sleep is thought to help us consolidate our memories from waking life. REM sleep occurs cyclically during the night and is common for all mammals.

6. Getting less than six hours of sleep each night increases the chances of premature death by 12%.

According to a University of Warwick sleep deprivation study that examined data from 1.3 million participants, there is a direct link between premature death and sleep deprivation. Getting less than the recommended 7–9 hours of sleep each night will make you feel tired and drowsy, but it will also increase your chances of premature death by 12%. Researchers state that consistently getting 7–9 hours of sleep each night is optimal for health and well-being. CBD products can help people fall asleep.

7. In the US, more than two-thirds of high school students reported getting less than eight hours of sleep on school nights.

American Academy of Sleep Medicine recommends that adolescents get 8–10 hours of sleep per night. However, more than two-thirds of American high school students sleep less than eight hours each night. Sleep deprivation statistics in America show that short sleep duration is the highest among 12th graders, and female students are more likely to report sleep deprivation than male students.

Additionally, sleep statistics show that as much as 40% of US adults in 2013 reported getting six hours of sleep or less each night. Although it appears that Americans are getting less sleep than recommended, the majority claim that they are getting all the sleep they need. This research also found that lifestyle was a major factor in sleep deprivation stats, with young adults and parents of young children reporting less sleep than senior citizens.

9. Lack of sleep statistics show that sleep deprivation adds up to $411 billion a year in economic losses.

Quality sleep doesn’t affect just our daily lives, but the economy as a whole. According to sleep deprivation statistics, lack of sleep causes lower productivity, higher mortality rate, suboptimal performance at work, and missed workdays. In fact, the US loses up to 1.2 million workdays a year. If the US workforce were to increase sleep time to seven hours a night, $226.4 billion would be added to the US economy.

10. Drowsiness is a factor in an estimated 7% of all motor vehicle crashes and 16% of fatal crashes in the US.

By analyzing the US Department of Transportation data, researchers found that drivers who slept less than four hours in the past 24 hours had 15.1 times more chances of being involved in a car crash. These sleep deprivation facts and statistics point to a serious danger that a lack of sleep can have for public health.

11. One in five young people wakes up during the night to check their social media.

A study of 900 students aged between 12 and 15 years showed that one in five students reported waking up regularly during the night to check their social media or send messages. Students with this habit were three times more likely to report feeling constantly tired at school. On average, students who said they were always tired also reported feeling less happy than their peers who slept through the night and woke up on time. People shouldn’t expose themselves to artificial light before sleep and need to sleep on quality beddings and mattresses.

12. Insomnia statistics show that one in four Americans develop acute insomnia each year.

Insomnia is one of the most common sleep disorders, with over 30% of adults reporting insomnia symptoms. Although insomnia statistics in America show that 25% of US adults will have bouts of insomnia each year, over 75% of those individuals recover without developing chronic insomnia. About 10% of Americans have chronic insomnia.

Insomnia statistics in the world show that roughly 10%–30% of the population is affected by this condition, with global insomnia rates on the rise.

Sleep apnea is a sleep disorder affecting airways. The most common symptoms include difficulty and irregular breathing during sleep. Loud or frequent snoring can also point to sleep apnea. Risk factors for this sleep disorder include obesity, smoking, and family history.

Sleep apnea statistics show that roughly 22 million Americans suffer from this disorder, with 80% of the cases still undiagnosed. If left untreated, this sleep disorder can lead to high blood pressure, cardiovascular problems, or stroke. Sleep apnea deaths statistics are largely unexplored because sleep apnea is more likely to contribute than be the primary cause of death in most cases. However, Yale University researchers found that people who have sleep apnea for five years are 30% more likely to have a heart attack or die.

Somniphobia is defined by having extreme fear of going to sleep. This phobia can be a consequence of sleep disorders such as insomnia, nightmares, and sleep paralysis. These conditions can make an individual afraid of going to sleep as they fear what will happen once the lights go out.

15. Parasomnias are disturbing sleep disorders that include sleep paralysis, sleepwalking, and nightmares.

Parasomnias can happen once in a lifetime, or several times a year. Sleep paralysis statistics show that 7.6% of the general population and 31.9% of psychiatric patients had at least one sleep paralysis episode in their lifetimes. When you have a sleep paralysis episode, your muscles are unable to move, but you’re fully aware. This feeling can cause extreme fear and anxiety, and in some people, even hallucinations can happen.

We spend a third of our lives sleeping. This biologically necessary activity directly impacts our health and well-being. As the percentage of people who are sleep deprived is rising, it’s more important than ever to understand the key facts about sleep, lack of sleep, and sleep disorders. Sleep deprivation statistics help us understand and mitigate the results of sleep deprivation and improve our sleep quality. People who have problems with falling asleep should try to find some products that can calm them down.

What percent of the population is sleep-deprived?

In the US, 70% of adults said they weren’t getting enough sleep at least one night a month, while 11% reported they got insufficient sleep every night. Sleep stats show that sleep-related problems affect 50 to 70 million Americans.

How many people die a year from sleep deprivation?

Sleep deprivation surveys show that lack of sleep is unlikely to kill. However, research clearly underlines that consistent sleep deprivation increases the chances of premature death by 12%. What’s more, sleep deprivation can contribute to various health issues, such as diabetes, cardiovascular diseases, obesity, and depression.

Is sleep deprivation an epidemic?

Insufficient sleep is globally recognized as a public health epidemic, with CDC warning about its effects on the well-being of the American population and the consequent economic losses in the US.

What age group is most sleep-deprived?

Teen sleep deprivation statistics in the US show that 68% of teenagers reported getting less than eight hours of sleep. High sleep deprivation rates were also noted among people aged 35–44 and 45–54 years (38.3% and 39%, respectively).

Which country is the most sleep-deprived?

According to 2016 statistics for sleep, Singapore, Japan, and Brazil were the countries with the highest percentage of the sleep-deprived population.

What are the effects of lack of sleep?

What are the signs of sleep deprivation?

The most common signs of sleep deprivation include excessive sleepiness, yawning, irritability, mood swings, daytime fatigue, and a general lack of energy.

What happens after three days of no sleep?

Going 72 hours without sleep will exacerbate sleep deprivation symptoms, such as tiredness and stress. Cognitive abilities will be impaired, with possible hallucinations and extreme mood swings. A person can experience difficulty multitasking, severe lack of focus and memory issues, paranoia, and depression.

How long does it take to recover from sleep deprivation?

According to a 2016 study on sleep deprivation, it can take up to four days to recover from just one hour of lost sleep. And while sleeping in on the weekends can help if you’ve been sleep deprived during the week, a consistent sleep deficit is hard to shake off.

How many people suffer from sleep disorders?